Altrincham’s Anthony Taylor will become the first person for 120 years to referee a second FA Cup Final after he and his team were appointed to this year’s showpiece.

Speaking to The FA, Anthony said “Of course, any Final is obviously a huge honour and privilege for the whole team to be doing and I sincerely mean that about the team because I’m in the fortunate position where I get to work with the same two assistants on every game both at home and abroad.

“It’s just an iconic occasion at the best of times, but this year is a unique one with no spectators. We know there are different circumstances this year and the 2020 Final will always be remembered because of this.

“But it was a little bit unexpected to get the call, having already refereed the FA Cup Final a couple of years ago, so I’m very humbled and equally honoured to have been asked to take charge of the Final again.

“It’s ironic that it’s the same clubs, but it’s now two different teams. Clubs who reach the Final don’t get there by fluke, and whichever teams end up in the FA Cup Final, it’s always going to be an intense occasion to officiate.

“However, any official who has refereed the FA Cup Final will say that when you’re appointed to the game, it’s not just recognition for you as an individual, it’s a recognition for all of the people who’ve supported you over the years and helped you to reach the elite level.

We wish the full team of Anthony, Gary, Adam, Chris, Lee, Stuart and Steve the best of luck.

A huge thank you to all the individuals and companies who donated prizes to our 2019 Christmas raffle, and of course to everyone who purchased tickets. The funds raised make a massive positive impact to the training and development opportunities for referees in the Altrincham & District area.

We are delighted to announce that our Young Referee of the Year for 2018/19 is Matt O’Shea. The award was in recognition of the work Matt did for the Society, the time he gave in mentoring our Trainee Referees, and for an outstanding on-field season which ended with promotion to Level 4 and appointments to the CCFA Youth and Minor Cup Finals, the ADFA Sunday Senior Cup Final, and selection for the Iber Cup in Portugal.

The trophy was presented to Matt by Premier League Referee Peter Bankes. 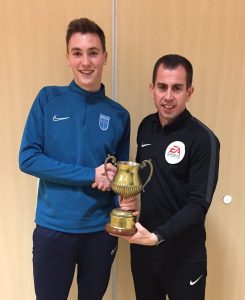